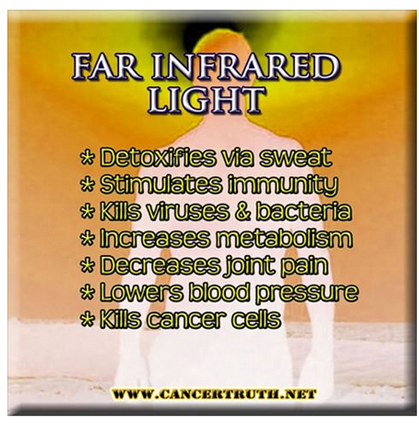 Posted at 17:11h in tend your body by the Crux of Health 0 Comments

“HEALTH TIP: “Far Infrared” (FIR) is a band of light produced by the sun, not visible to the human eye but detectable as heat. This is the heat you feel that penetrates and warms your skin when you stand in the sun, and it is the same heat you miss when you walk into the shade on a cold winter day. FIR heat is a completely safe form of naturally occurring energy that heats objects by a process called “direct light conversion,” which warms only the object and does not raise the temperature of the surrounding free air. This type of energy travels up to 3 inches deep into the body and increases circulation and nourishes damaged tissue.

With a FIR sauna, your body receives a deep detoxifying sweat that is sustained at about 120 degrees as compared to the 180 degrees that would be required from a traditional steam sauna. By creating an “artificial fever,” FIR heat has a positive effect on the immune system. Often misunderstood, fever is a natural healing response of the body. The function of the immune system is increased naturally during a fever, while viral and bacterial growth is slowed. Last night, I felt like I might be getting sick, so I sat in the sauna about 45 minutes (as I do almost every night). Voila! After I got out of the sauna, I felt better and never got sick.

A 2001 study by Dr. Masakazu Imamura (published in the Journal of American College of Cardiology) indicated that 30 minutes in the FIR sauna can burn upwards of 600 calories. As your core temperature increases, the body works hard to cool itself, and there is a substantial increase in heart rate, cardiac output, and metabolic rate, causing the body to burn more calories. The increased metabolic rate causes extra toxic waste products to be purged from the body through the skin, during perspiration. The skin is often referred to as the “third kidney” because it is believed to be responsible for eliminating 30% of the body’s toxic waste.

In 1989, German medical researchers reported in “Dermatol Monatsschrift” that a single whole-body session of infrared-induced hyperthermia lasting over one hour had ONLY beneficial effects on subjects with hypertension. Each subject experienced a rise in core body temperature to a maximum level of 35.5 degrees Celsius (100.5 Fahrenheit). All of the subjects in one experiment had significant decreases in arterial, venous, and mean blood pressure that lasted for at least 24 hours.